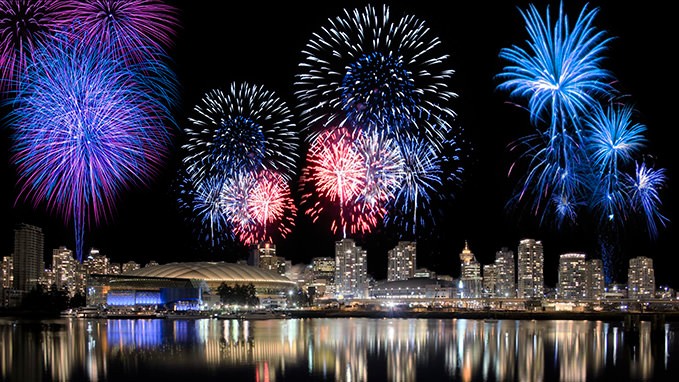 Good fireworks photography is all about preparation, the right equipment, and practice. Here are some steps for best results.

Fireworks have been around for centuries, delighting us with their light, color and sound. This post looks at best practices for bringing home bang-up images of these tremendous bursts of light and color. (You’ll have to manage capturing the sound on your own.)

When possible, bring your camera to scout the site. You want to know how close or far away you’ll be from the action, so you can strip down your gear to bring only what you need.

Fireworks can be shot with everything from a superwideangle to a supertelephoto, but when you’re going to an often-crowded location, you don’t want to have to watch a big camera bag or worry it will be stolen. Bring only what you need. 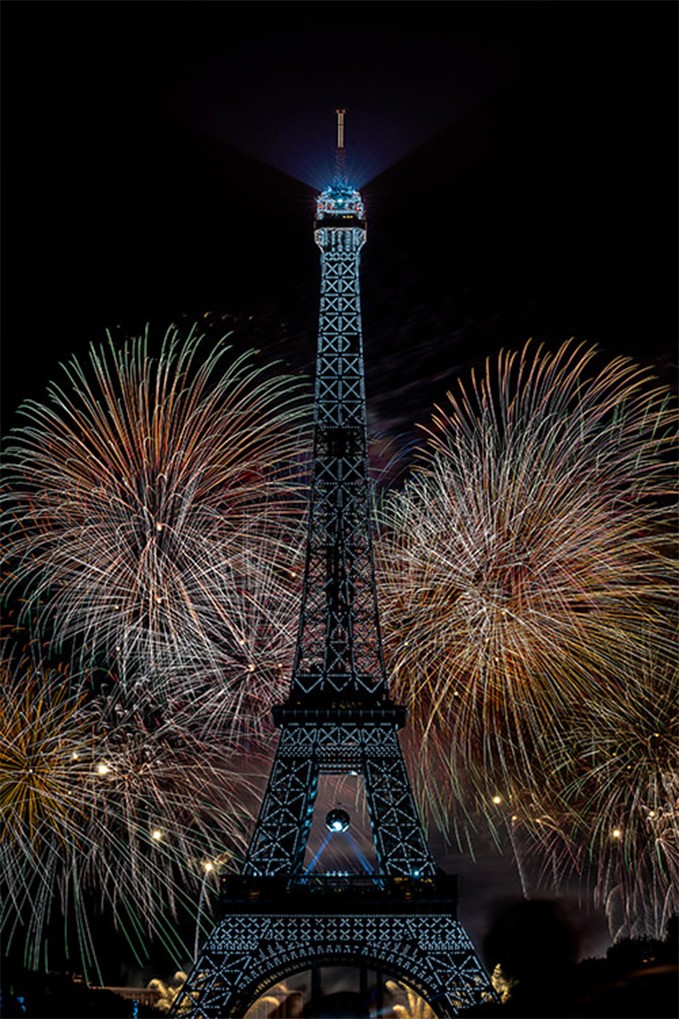 If it’s not possible to scout in advance, bring a moderate wide angle to moderate telephoto for shots overhead, and a longer telephoto / zoom for creating images over distant buildings, such as fireworks over the U.S. Capitol dome from far down the Mall. The image of the fireworks in Paris was shot from the back of the Champs de Mars with an 80–200mm Nikkor on a very sturdy tripod.

Look for a spot to set up your tripod on very firm ground, where people won’t cause vibration by walking, shifting, or banging into you. Plan to come early; fireworks photography has become very popular, and if you show up at the last minute, all the good places may be filled with other photographers who will refuse to make room for you!

Do your best to pick your site so that strong lights (moon, floodlights, streetlights, etc.) aren’t shining into your lens, nor into your viewfinder. Of the two, the lens is more important, as you can shield your viewfinder more easily. You should also be certain that people won’t be standing so close to you they block your shot. Make sure buildings don’t block your view.

Images such as the previous one and the one below are created using long exposures (13 seconds, in the first case). A very sturdy tripod is essential to create great fireworks images. If you think you might want to switch from vertical to horizontal orientation while shooting, you’ll want to look at quick ways to flip your camera.

Shooting with a lens which has a collar makes rotating  easy. For other lenses, consider a tripod head that uses a Swiss-Arca mount. You can put mounts on your camera body, as well as the feet of your collared lenses, making flipping your camera from vertical to horizontal quick and stable. 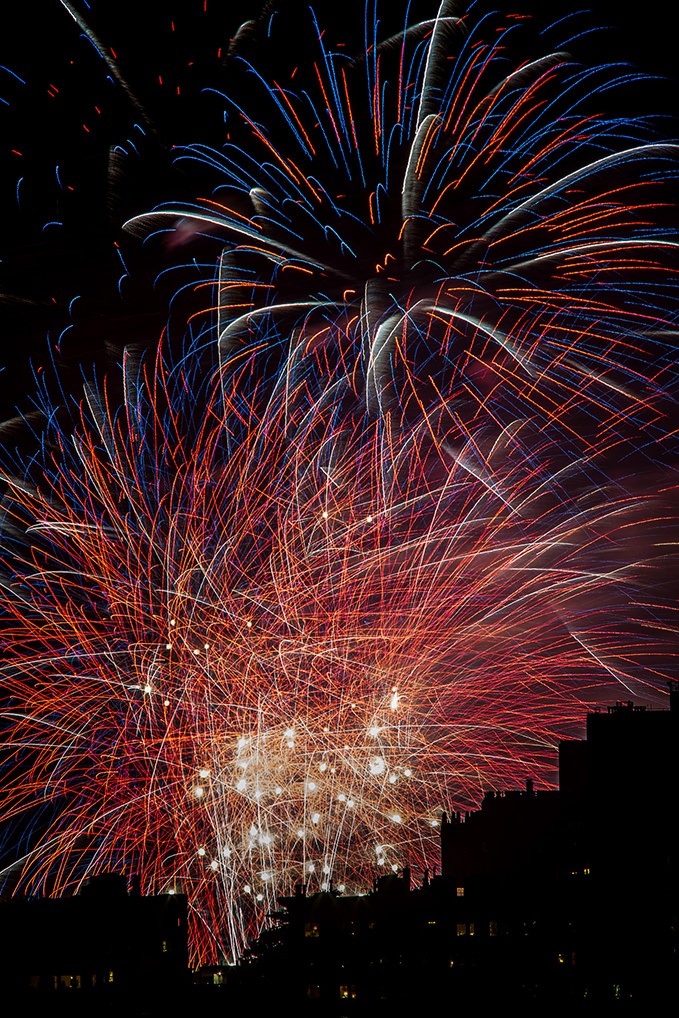 You’ll want to research your camera’s long exposure capabilities. Some camera bodies are much better than others for this type of work, minimizing the noise that builds up over multi-second exposures.

You’ll need a cable release that allows you to keep the shutter open when your camera is sent on B, either by holding down a button or a mechanical lock on the release. (If you use an intervalometer,  it must have quick shot capability on command, not timed release) with exposure lock.

In order to keep the shutter open between bursts of fireworks, bring a matte black card to hold in front of the lens between the bursts. It’s always worth having a small pocket flashlight. I like this one, from Inova, because red light preserves night vision better.

I also bring along a spot meter when shooting scenes including buildings, so that I know the limits of the long exposures I can do before the building will be overexposed.

Finally, be sure to bring as big a memory card as you can. In a long show of modern fireworks, the combinations of colors and shapes vary widely, as do the possibilities for great images. and you’ll want to capture as many frames and variations as you can, without having to change cards midway through the excitement, as shown here.

Once you get to the site you’ve pre-selected, set up your tripod and camera on sturdy ground. Aim the camera where you think fireworks will be bursting. If you’ll be shooting more than one direction, e.g. overhead and off to one side, or vertical and horizontal, test your tripod head and practice changing,  to be sure you can switch easily between the two directions when you’re shooting.

Set your camera mode to Manual (M), and your shutter speed to B (Bulb). Originally this setting was named for the old style of shutter release, a squeeze bulb which held the shutter open as long as you squeezed the bulb. Now, we use more contemporary releases, but the goal is the same; keep the shutter open without introducing vibration to make the exposure. If your camera uses a wireless remote, you’ll need to check your camera’s manual to be sure you master opening the shutter and keeping it open as long as you want, then closing it promptly.

Now, set your ISO to something very low (I use ISO 100 routinely, but not all cameras go that low). The bursts of fireworks are so bright you don’t want to use a high ISO; the bursts would burn out, and the amount of noise rises quickly as you use higher ISO settings for long exposures. Be sure your camera is set to record in Camera RAW; you’ll want all the editing capability to pull the best out of each image you create.

Set your starting aperture to ƒ/10 for ISO 100 or ƒ/14 for ISO 200. You’ll fine tune this after the first couple of shots, to see if you need to stop down more (often needed) or open up. Finally, set the focus of your lens to infinity.  Attach the cable release. Finally, set your camera to shoot in Camera RAW; it will definitely help in the editing later when creating the best print.

Prepare for the Shot 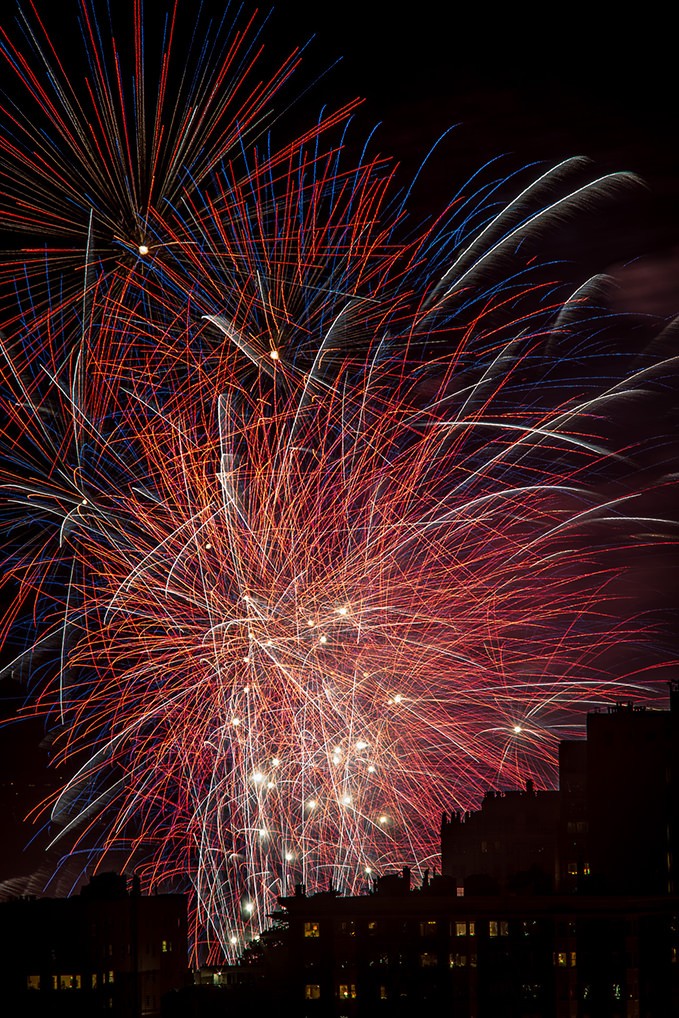 If the only thing in the frame will be fireworks, you’re ready. Wait for dark, and the first burst. If the fireworks will be bursting over a building or other element which will be included in the images you capture, you must balance your exposure for the building. To check your exposure, wait until dark, and then use your camera to meter on the building in question at the f/stop you’ve set.

You can see in the images above that the buildings at the bottom of the frame have been carefully exposed as silhouettes, rather than exposed to show detail. When possible, this is a great way to include a structure without it competing with the fireworks in an image.

Determine the recommended shutter speed for your chosen ƒ/stop from the camera’s meter (or hand meter with a spot center, if you have one), and shoot a test exposure. See how many seconds you can keep the shutter open, before you overexpose the building. That’s as long as you can keep the shutter open to capture multiple bursts before the building will overexpose.  If you decide that this isn’t long enough to capture choose an even smaller aperture, such as f/16.

You’ll also want to watch carefully  to be sure you don’t do such a long exposure This is a tricky balancing act, to get the building correctly exposed while capturing the fireworks. It is easier to do with digital cameras watching the 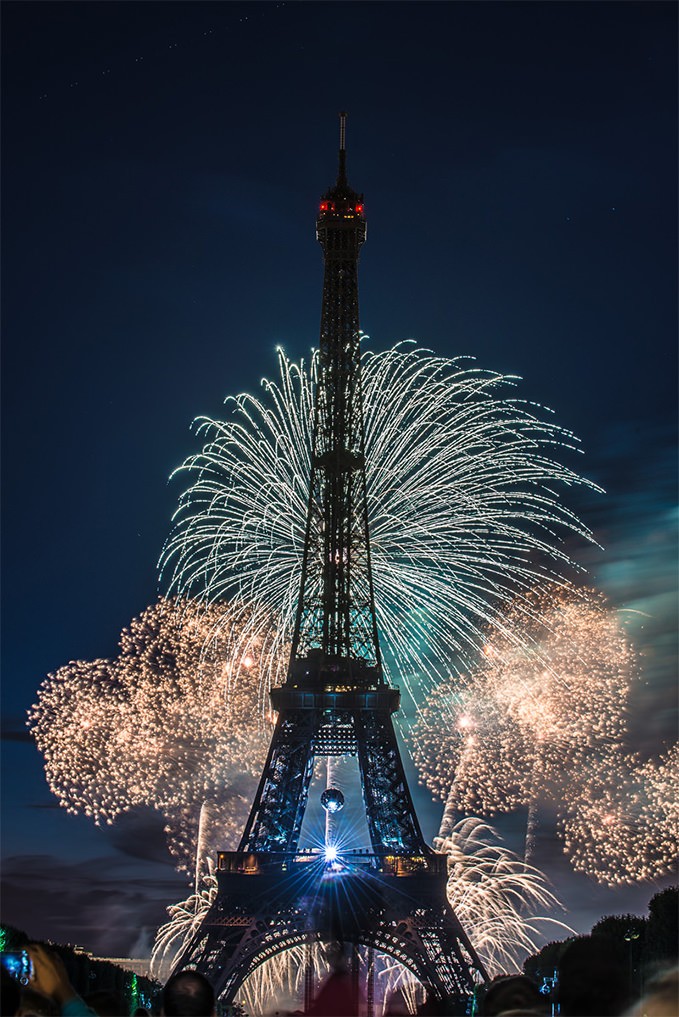 When the first burst of fireworks explodes, shoot a photo, and check the preview on the screen to make sure the area being captured is correct. Adjust as necessary by moving the tripod head and changing the lens, as needed. Repeat your test; evaluate, and lock down your final direction and aperture.

Now, decide if you want only a few bursts in one frame, or a lot. If you want fewer bursts per frame, shoot and close the shutter more often, capturing fewer bursts at a time. If you want to capture more bursts on one frame, keep the shutter open longer, but put the black card in front of the lens between bursts, so that you’re not exposing the sky when no fireworks are bursting in air. You may want to stop down your lens even further, so you don’t burn anything out as you stack multiple bursts into one frame.

As you shoot, check your focus to be sure it’s where you want it. Continue to check your exposures, and fine tune as needed, adjusting up or down. As these shows build toward their climaxes, they usually let off more fireworks closer together, meaning your exposures will either need to be shorter, or your f/stop smaller to balance the larger amount of light coming in as the show’s grand finale approaches.

Do you have a great shot of fireworks of your own? Post it in the comments! We’d love to see it. 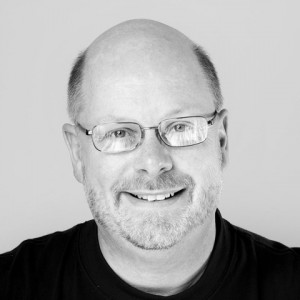 Kevin O’Connor helps design and test software, is a graphic designer and photographer for multiple clients and companies, and fixes people’s (and companies’) color.

He has consulted to multiple companies, including Apple, Sony, Fujifilm USA, and X-Rite. He loves teaching good color practices to enthusiastic learners.

Have a Question For Kevin?

Get Your Question Featured
on the #AskBC Podcast

We are going to feature Kevin on an upcoming episode of the podcast and would love to have him answer your color profiling questions. 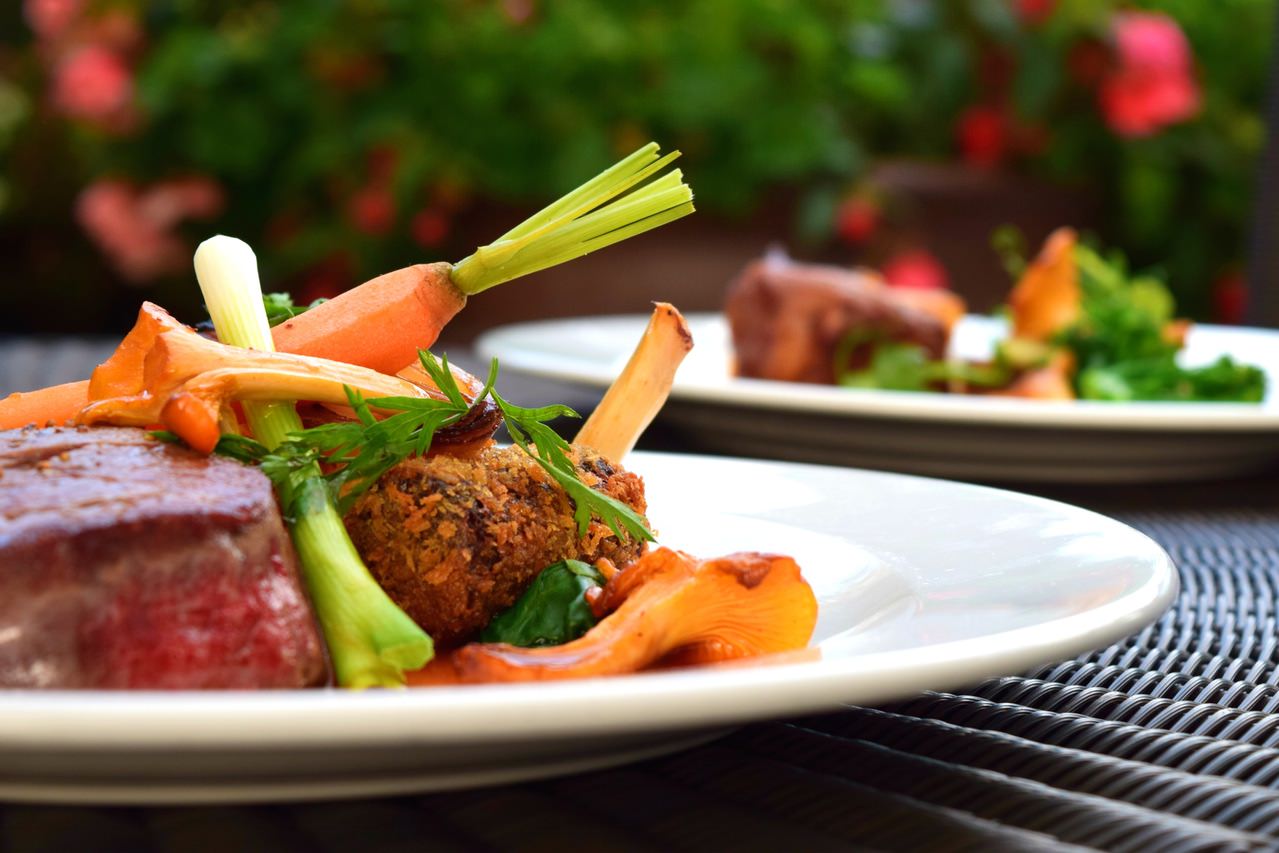 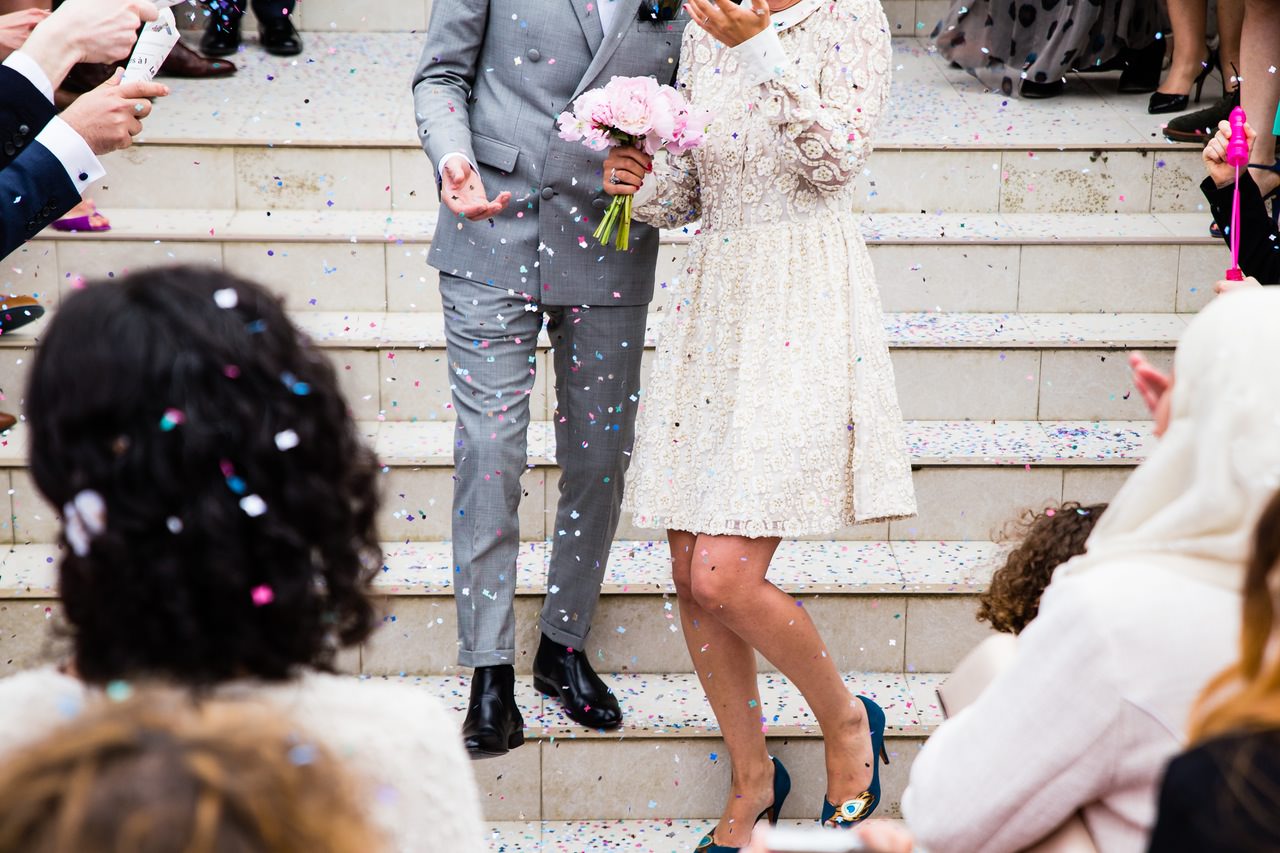 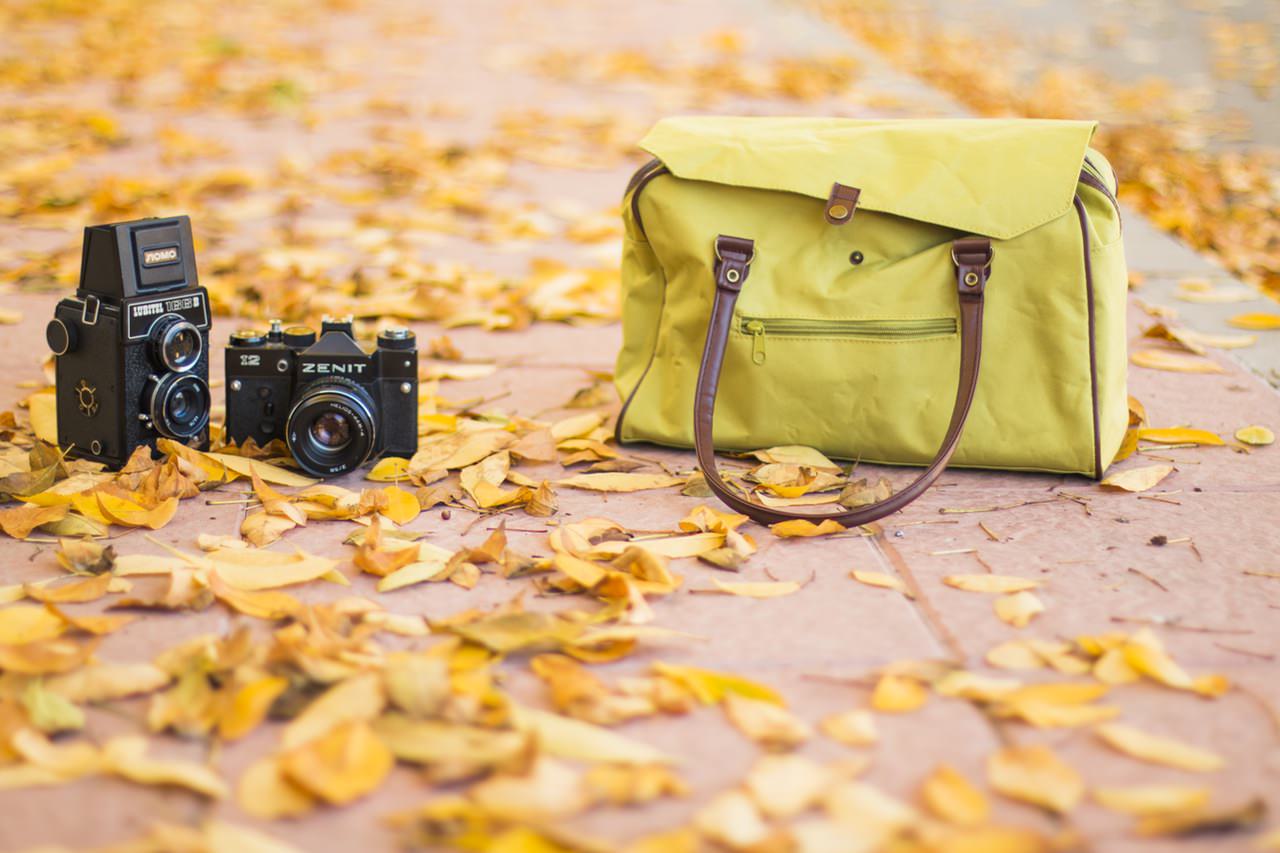